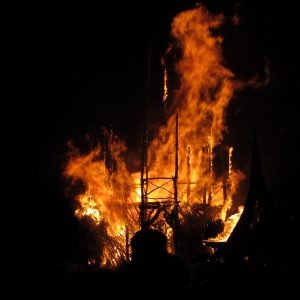 The origins of Bealtaine or Beltane are almost as old as Irish mead itself. There are many folk beliefs some of which have pagan origins. Held at the start of May at the halfway point between the spring equinox and the summer solstice, the High King would call the local chieftains and their people together to dance around bonfires and drink mead to welcome the start of summer and generally have a good time. They would perform rituals to protect them from harm and to promote new growth and fertility.

Bealtaine or Bel taine in Old Irish, is often associated with the Hill of Uisneach (Cnoc Uisneach) in Co. Westmeath, well worth a visit. Archaeologists have confirmed the there are extensive layers of charcoal and evidence of huge fires on the hill. Though the hill is only 600 feet tall, on a clear day, you can see as far as 20 counties from the top.

It is thought that the festivals involved not only mead drinking but also sporting competitions, poetry and singing and driving cattle between two bonfires to bless them as they were moved to their summer pastures. These festivities continued well into the 20th century and were exported with the diaspora to Newfoundland and beyond. 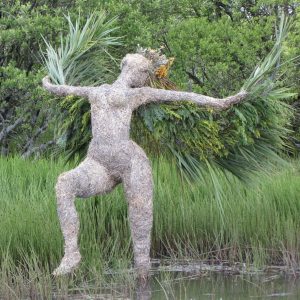 Some people even attempted to leap over the fires, a common cleansing in many cultures. Do not try this at home!

Even today it not uncommon in parts of Ireland to leave yellow wildflowers or a May bush on the doorstep at Bealtaine, to ward off the pisheogs. Beltaine festivals are still held today around the British Isles, often on hills. When the first bonfire is lit, people waiting on surrounding hills light their own fires and so the fire spreads from hill to hill around the country, wherever people gather.

May is a common name for Hawthorn, one of the west Cork flowers that our local bees have foraged to make our Wildflower Mead. Bring mead to your own festivities this year with a bottle or two from our online shop.