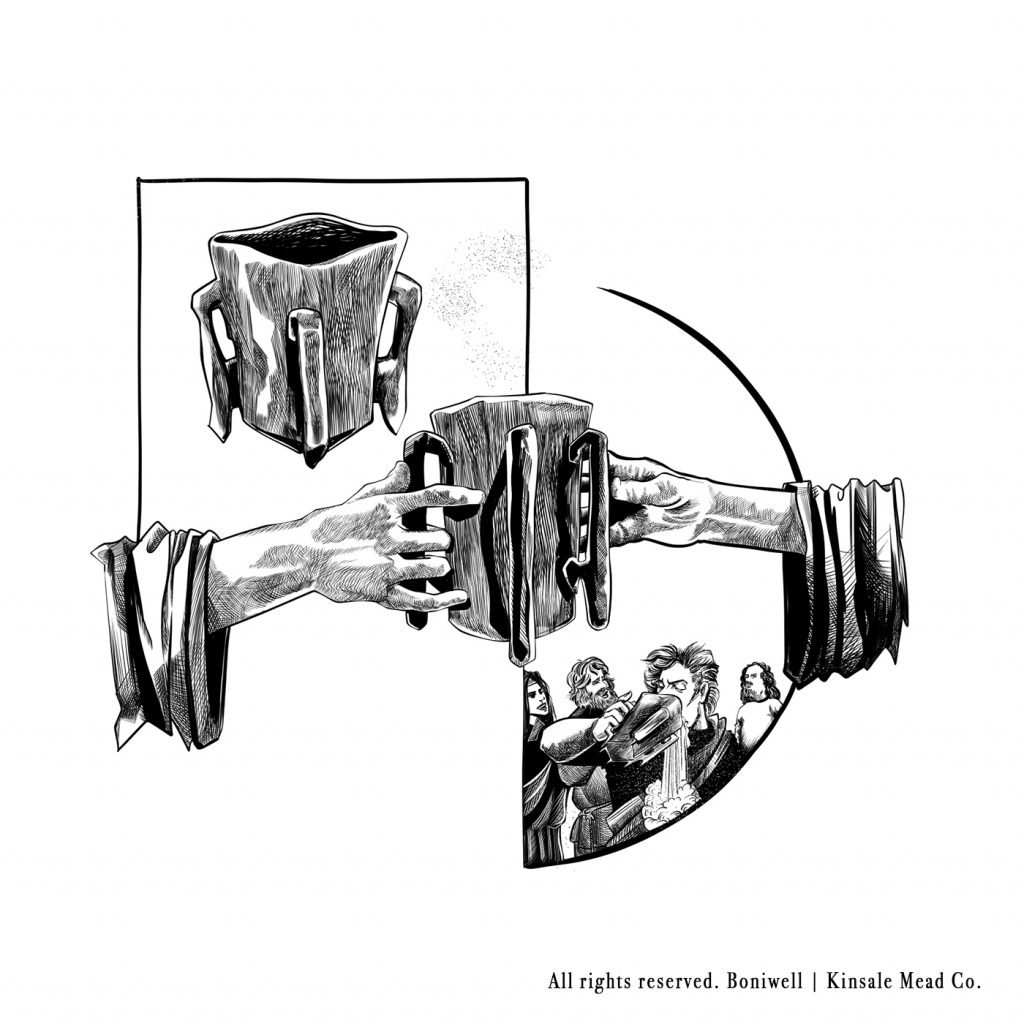 We are often asked about the Methers in our meadery. Methers are ancient Irish wooden drinking cups carved from single piece of wood used for mead from about 11th century onwards until around 16th century when the celtic traditions were suppressed following the Tudor conquest of the whole of Ireland. Only a few methers have survived in museums.
Feasting was an integral part of medieval Irish society. Under the king’s or chieftain’s direction, the mether was filled with mead before being passed around the hall. He was using his precious allocation of honey to make the delicious mead to honour his guests. It was passed around a ‘full circuit’ of the banqueting hall in the direction of the sun and guests were expected to drink moderately so that the Mether could complete the circuit before the mead were drained by the lord sitting at the head of the table. A real sharing cup!
This circling of the Mether and sharing of the mead is familiar from the Irish name of the Great Mead Hall of Tara on the Hill of Tara, Teach Miodhchuarta, the Mead Circling House. The closer you were placed to the Lord, the more important you were. We have the seating plan from the Book of Leinster.

There is a later report in a journal from Georgian times about the “Mether Drill” to teach visiting foreign dignitaries how to drink in the “Irish Fashion”.  Because the mouth of the mether is curved, if they weren’t told and drank out of the sides, the mead flowed down the corners and drenched their fine clothes. Causing much hilarity. So if you ever have to drink out of a mether, drink out of the corner!
There is a small collection of methers in the National Museum in Dublin, the Butter Museum in Cork and in the Hunts Museum in Limerick.

Here’s a museum link too

The four handled mether featured in the Celtic revival of late nineteenth and early twentieth-century Ireland. The design of the Gaelic Athletic Association’s Liam MacCarthy Cup, is a silver Mether and is awarded annually to the winners of the All-Ireland Senior Hurling Championship. And this mether is then toured around the winning county so everyone can share in the glory. It was first presented in 1923 to the Limerick team which defeated Dublin. It was chosen in 1922 just post the civil war partly because of its Celtic associations but also because it was sharing cup and the GAA were anxious to promote peace and reconciliation. The four handles represent the four provinces of Ireland. 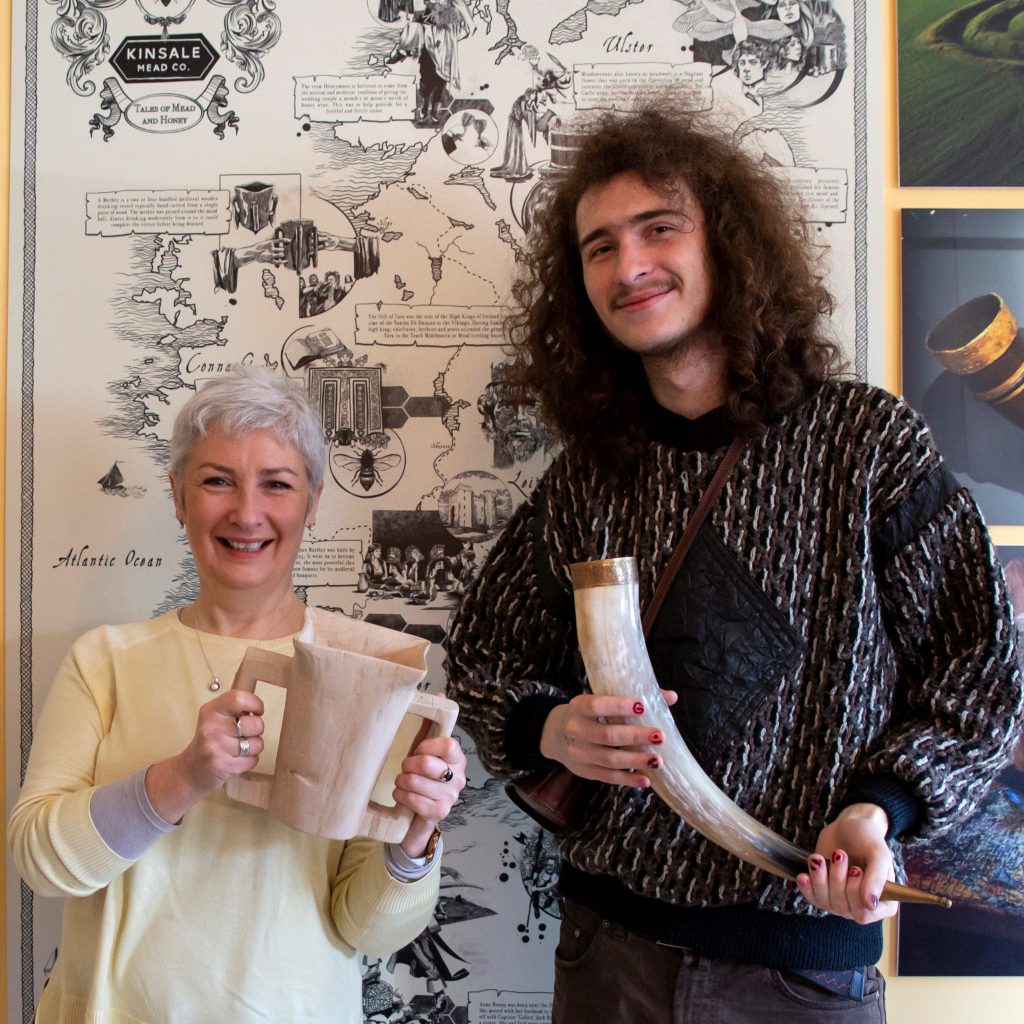 You can see our methers in the meadery when you come on a tour. These were carved from a single piece of wood, not wood-turned, by a wood carver in Gorey, Co Wexford. We also have a drinking horn, for a bit of fun. Research suggests that drinking out of horns was not common in Ireland as there was a shortage of horns. There are some metal horns that survive but they are all ceremonial rather than for every day usage.

But both are perfect for drinking your Kinsale Mead! 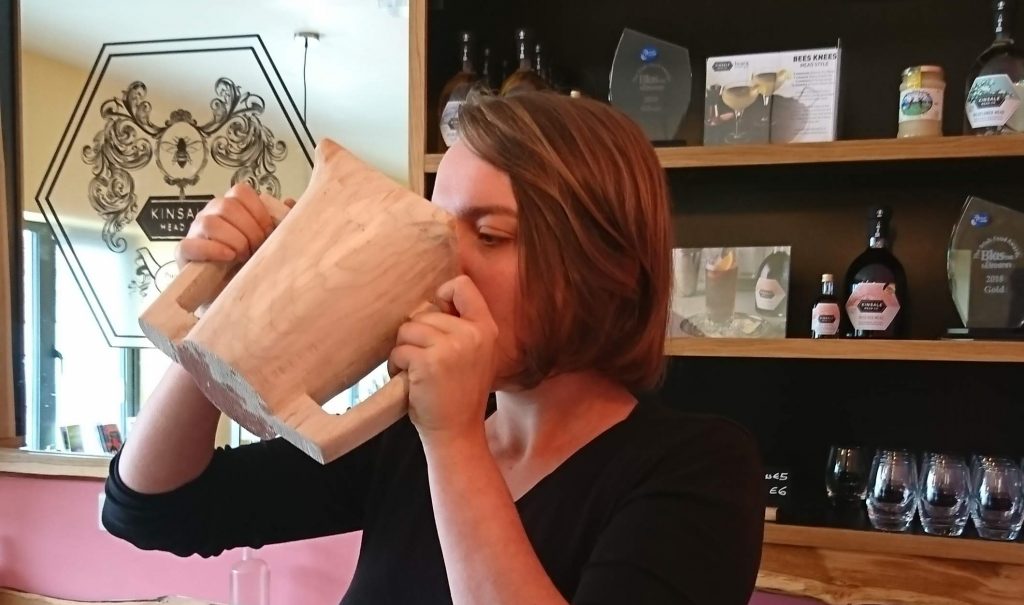